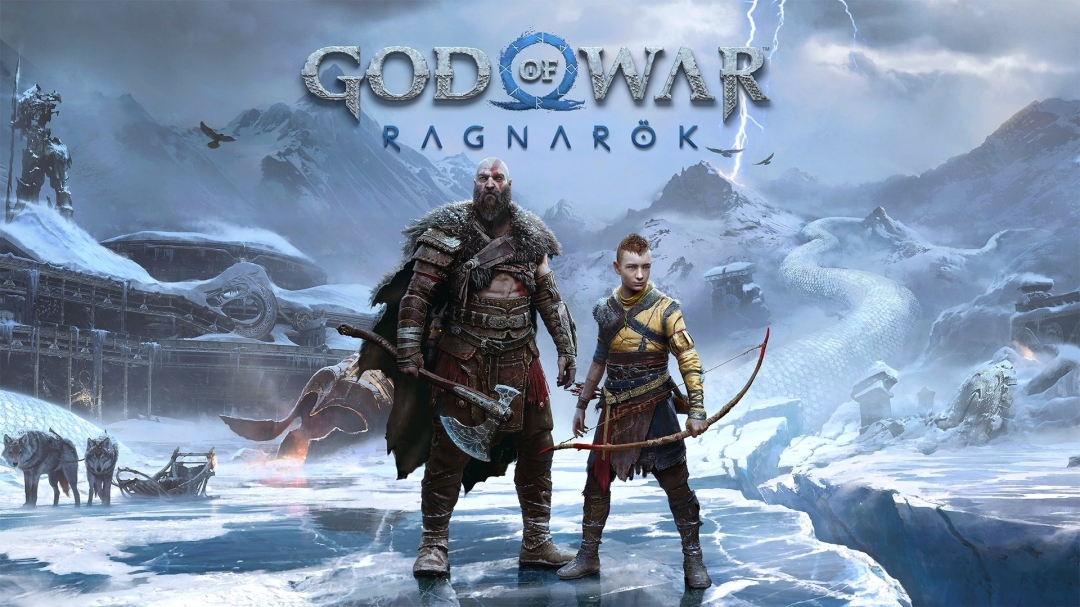 The almost entirety of 2018’s God of War felt like a setup for a large, world-shattering plot. And, it’s safe to say, with Ragnarok, the devs at Santa Monica have successfully delivered on that payoff. It does not feel like a sequel so much as a logical continuation of the first game: What I mean is that Ragnarok is not on the level of difference of say Horizon: Forbidden West was to its predecessor. Ragnarok’s new mechanics, while often exciting and obvious, also result in some of the most frustrating play I’ve encountered in some time.

The God of War franchise is a third-person action adventure series, that centres entirely on a brooding, powerful grump called Kratos – who is both perpetrator and victim of divine machinations. After killing the entire Greek pantheon in the first games, Kratos made his way to the realms of Norse mythology to be embraced by the reboot gods. There he met a woman and had a son. That son, Atreus, becomes Kratos’ companion – and in this game, the second playable character – who assists players on their adventures. Atreus, however, turns out to be a central figure in Norse mythology, namely Loki. Like his mother, he is an incredible magic user, but also is developing god powers from his father: the ability to shapeshift, recognise languages and speak to any creature.

When we left Kratos and Atreus at the end of the 2018 reboot, they had just killed the whiny entitled god brat, Baldur. This was Kratos’ attempt to, as it were, break the cycle of children killing parents that seems to be the lifeblood of the gods. He was saving the life of Freya, Baldur’s mother, who had become a fast friend in the last game. Despite saving her life, Freya swore vengeance on Kratos with one of the best curses I’ve heard: “I will rain down every agony, every violation imaginable, upon you. I will parade your cold body from every corner of every realm, and feed your soul to the vilest filth in Hel. That is my promise.”

And so, when Ragnarok begins three years later, you are battling an enraged Freya. Kratos, over those three years, has become more sombre, self-reflective and soft. He refuses to hurt Freya unless it is to escape her. But shaking one Norse god off doesn’t mean shaking the rest.

It is here when players are introduced to the two major gods that haunted the first game: Thor and Odin. Odin attempts to broker peace between him, his gods and Kratos. However, Kratos being Kratos… says no.

Kratos, if nothing else, will never kowtow to gods’ requests and generally takes an obstinate, if not hateful, approach toward all such beings. Thus begins the ongoing conflict throughout the game: Kratos versus… well, the world.

Kratos and Atreus are trying to rid themselves of the gods’ power and, ostensibly, prevent Ragnarok (the end of the Norse world, as it were) from occurring. Yet, they are also playing out the roles fate has dealt them and seem bound to make the very mistakes they know they are destined to. It’s a fascinating meditation on free-will, when even beings as powerful as gods are bound to the tethers woven by fate (though,some Norse scholars will tell you, in no uncertain terms, the Norns don’t necessarily “weave” anything).

The brutal combat from the first game returns, with Kratos using his Leviathan Axe and Blades of Chaos, to rip apart all who oppose them. The animations are even more details and bloody, combat feels fantastic and flows wonderfully. (There is a third weapon, but I’d not spoil it nor the beautiful way you acquire it). Atreus is more powerful, too, wielding magic in ways not seen before as he comes into his godly power.

Also, Atreus as a character feels surprisingly fantastic: He is first an archer but it feels like what John Wick would be like with a bow. Atreus spins, dives, weaves in balletic fashion to eliminate enemies. He is a worlds apart from his father, who “feels” like controlling a murderous mountain.

The game has so many different, beautiful and unique locations – filled with mysteries to solve and quests to accomplish. The ability to travel between most of the realms was a wonderful addition, not least of which was realising how open and big these worlds were. Only a few were very limited, whereas most were explorable in a mini-open world sense. And with each location, comes different enemies and it’s wonderful to see how much enemy variety there is, each requiring different mechanics and approaches.

I was also pleasantly surprised at how wholesome the game often was: Kratos shows appreciation, says thank you, and so forth. Mimir has become a second father to Atreus. Brok and Sindi, the dwarfs, have become close confidants, much to Kratos’ dismay initially of the young man.

I can’t talk too much about Freya without spoiling it but needless to say, her arc and performance speaks volumes about the quality of the writing and Danielle Bisutti’s remarkable performance.

Odin, however, remains my favourite: Played by The West Wing’s Richard Schiff, Odin initially comes off as a timid, friendly and amicable old man. But his thirst for knowledge, his manipulation of everyone and his bloodthirsty desire to “know” is what leads to the end of the world. His refusal to acknowledge his selfishness, his vanity and his ego undoes the world; he blames everyone but himself for the mistakes occurring around him. But he is constantly charming, embracing, two-steps ahead of everyone. I could not help but love this portrayal, since it is so close to the stories I’ve read of him in the myths. He is everyone’s abusive but charming father, except he could undo the world.

However, I was often frustrated with some new mechanics.

The first is the frequency with which companions spill hints to solve an environmental puzzle. Players will be barely into a level requiring some clever thinking before Atreus, their companion and literal talking head Mimir or someone else chimes in and gives the solution. I’m uncertain why this solution providing was not at least a toggle, let alone so short.

The combat also had many moments of frustration, not least because of the inability to interrupt Kratos’ combat animation. See if you start some move but in the middle of, say, swinging your chains you want to block an incoming attack, you cannot do so – Kratos’ animation keeps going, leading to you getting hurt. All this really means is that button-mashing is a no-go, but I would’ve appreciated if blocking or dodging interrupted a combat move. It makes little sense that it does not and I was frequently killed because of this.

There is also a hair-tearing puzzle mechanic that requires you to chain two or three spheres together. See, your archer companions eventually gain the power to shoot Sigil Arrows. These Sigil Arrows, once fired, create Sigil Spheres which embed in the ground or walls or wherever they land. If you place them close enough that they touch, they can chain fire from Sphere to the next. This is useful when you have to burn some part of the environment away.

The problem is it’s often impossible to tell whether spheres are touching or where to aim, due to the angles and globular nature of the spheres. Often I’d think I’d managed to find a sweet spot where the Spheres were definitely touching, only to be surprised I was, in fact, incorrect. Add to this, the spheres have a timer … so good luck. I’m uncertain who thought this was a good idea, but it remains the worst puzzle mechanic I’ve experienced in a game. If it happened once, so be it – but it’s a frequent, recurring puzzle mechanic throughout the game.

Ragnarok is not so much a worthy successor to 2018’s reboot as the inevitable and welcome conclusion that 2018 set up. I cried numerous times and felt completely satisfied with the scale the game operated on. I expected big… I did not expect this big. What a wonderful experience. Who knew you could end up feeling good at the end of this world-ending calamity?