“A hallmark of pandemic disease is its ability to destroy worlds, not just individuals”  – John Kelly, The Great Mortality.

This is the message I took away from Asobo Studio’s A Plague Tale: Innocence.

The plague has taken everything. A sea of isolation rages across the landscape, bringing with it a toxic silence. Bodies buried, the earth nevertheless opens to accept the creatures who, with their flames and their poison, are set on destroying it. The natural rhythms of life mutated into nail scratches against stone. Society joins together by remaining apart, a spider-web of connection rather than cocoon. But webs, despite their disparate points of contact, remain strong; while each thread, each of us, is fragile, together we capture what is needed, remain sturdy against storms.

We must not lose hope, while accepting our struggle to maintain eye contact; we cannot lose strength, but must accept moments of weakness. Some speak of “forces” beyond our control, as if we had much control to begin with. No, instead, this is a realisation of how fragile we all are – our only skill creating marvellous artifices moulded by agreement, call it society, call it laws, all the while forgetting these are threaded by us, the entities made of fragility. Such a message seems to me relevant to us.

Plague Tale is a third-person action adventure game, set in the Hundreds Years War (the 1300’s). Players take on the role of Amicia de Rune, a teenage French noblewoman. In a very short space of time, English soldiers and the Inquisition have invaded and destroyed her family and home, she has fled with her younger brother who she barely knows, and they are completely alone. As she enters the towns, evidence of the Plague is everywhere.

In Europe, where the most complete figures are available, in many places the plague claimed a third of the population; in others, half the population; and in a few regions, 60 percent. The affliction was not limited to humans. For a brief moment in the middle of the fourteenth century, the words of Genesis 7—“All flesh died that moved upon the earth”—seemed about to be realized. There are accounts of dogs, cats, birds, camels, even of lions being afflicted by the “boil,” the telltale bubo of bubonic plague. By the time the pestilence ended, vast stretches of the inhabited world had fallen silent, except for the sound of the wind rustling through empty, overgrown fields.

This is the environment players navigate. Men in shining armour walk through the landscape, their armour caked in blood but lit by nearby flames. Nearby the dead are stacked for convenience rather than respect, practicality prioritised over dignity.

While avoiding these, another factor emerges – sometimes literally: Rats. In Plague Tale, rats are not only obvious spreaders of the plague, but are almost supernaturally charged entities working collectively to eat and destroy anything that happens to be in the dark. These rats, made of pure night, with bright eyes, are afraid of light – meaning humans carry torches and lanterns at night, to avoid being eaten alive in seconds.

In reality, the plague was and is, says Kelly, “a disease of rodents. People are simply collateral damage, wastage in a titanic global struggle between the plague bacillus Yersinia pestis and the world’s rodent population.” Here, however, they are determined, terrifying entities, hellbent on destroying all live flesh that touches the dark. 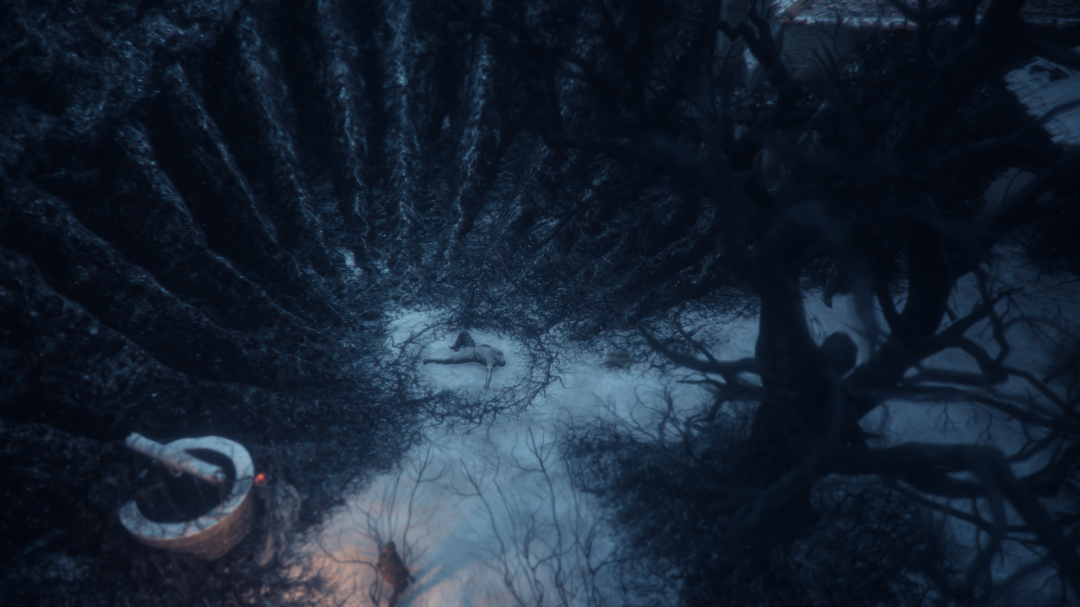 This becomes a mechanic: navigating the world means finding sources of light or setting meat traps: sometimes those meat traps are encased in armour with English accents. Yes, with a preternatural skill, Amicia is able to dislodge lanterns and torches carried by the soldiers with a variety of tools: a sling, some magic powder, and so on. This leaves soldiers patrolling rat-filled places in the dark and the sudden shudder of violin strings announces a swarm of rats who descend on the hapless benighted man, as he screams while his flesh is eaten away.

So yes, this is also a horror game.

Central to this game is the growing relationship of Amicia and her brother, Hugo. With brilliant vocal performances by Charlotte McBurney and Logan Hannan respectively, these two are almost always holding hands as they navigate this dangerous world. They fight and bicker, hug and snuggle, and grow to love each other. With Hugo’s age and mysterious illness, he is particularly vulnerable to the world. But through the game, Amicia goes from a level-headed but naive girl from a rich family to an intelligent, brave young woman – becoming more than capable of protecting her sibling.

Environments are gorgeously detailed and varied: from French estates to plague-ridden streets, forest garrisons to gothic cathedrals. It beautifully blends stealth, third-person action, platform and puzzle-solving, in a horror-infested world.

The world is burning but power-hungry men will always yearn to crave even the ashes. They will dust their hands on their chests proclaiming they hold the answers, but it’s simply to cloud the emptiness they hold. Fear, not respect, creates their followers and so these men will magic up monsters only they can slay, when real monsters, the ones causing this pain, will be ignored. To slay such beasts would truly abate the fear and then where would they get their followers? The Grand Inquisitor, the main antagonist, is such a man. He claims to work for the Church but even this is a cover for his true desire.

Despite the the power of Inquisition forces, these two children must find a way to survive in this destroyed world. Along the way, they meet a group of fellow stray children – a Lost Boys type scenario: a brother and sister who are thieves, a blacksmith’s apprentice and a young alchemist. Amicia rises as their Pan. These complicated young people have layers you experience throughout the game – of irrationality, jealousy, bravery, love. It’s testament to the game’s writing that no one, not even Hugo, is treated as a silly child. All have layers, all are truly believable.

Unfortunately, the villains are two dimensional. As indicated, the Grand Inquisitor and his main soldier, while very creepy, are cartoonish in their motivations. There was little substance to their motivation and they would be not out of place in a Captain Planet episode. However, each suffers from a cartoonishly satisfying death so at least there is some balance.

Top this off with a magnificent score and sound design, a fulfilling play time – not too long and not too short – a crafting system that isn’t invasive and some moments of levity, and you have one of the best games to come out of 2019.

With a solid and satisfying story, excellent performances and thoughtful content – in terms of history and its message – if you want to get lost in a world of plague that isn’t our own, I highly recommend A Plague Tale: Innocence.

One thought on “A Plague Tale: Innocence’s resonance into today’s plague-filled world”