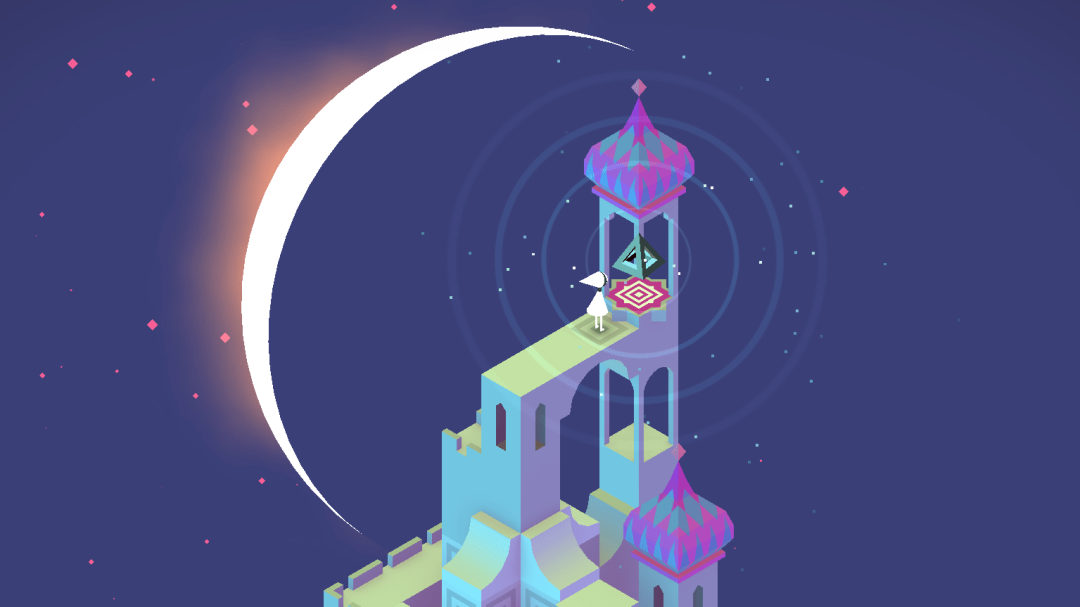 How did I miss Monument Valley?

A silent princess wanders a world where angles and geometry turn supine under player manipulation. She navigates a world whose architecture stems from a mind aligned to MC Escher, attempting to salvage an apparent dying world. The lonely landscapes stretch and bend, spines covered in the flesh of the impossible. Every stage is a puzzle, an attempt to bring the princess in proximity to a goal whose end you never understand except you know it’s her destination.

This is the world of Monument Valley, a game I’m only now discovering for iPad and other mobile devices. It’s simplicity belies its depth, its silence should not be mistaken for emotional connections. Like Journey, Monument Valley does little to explain its world but quickly teaches you how to exist in it. This is not a world where savagery and combat are solutions: instead, it’s one of thinking, turning, pushing, and suggesting. You must help the princess get to the end of the puzzle. While the princess is monochrome, the world around her is bathed in a variety of colours and angles. They’re living puzzles: creatures and nature exist and waft in breezes, cry out and swim in water. Impossible geometric shapes are tools rather than hindrances, helping the princess breach gaps that would be impossible to otherwise traverse.

You tap on blocks to indicate where the princess must move to; you then are able to push and turn the certain blocks or entire stages. From different angles, outcrops form perfect bridges, stairs leading to nowhere become the solution. The puzzles are not particularly difficult, but they are incredible satisfying in their solution.

One level was entirely a box: You have to pull at different levels, flip open corner and rotate levels. At the end, the box awakens and reveals itself in all its glory of which you caught only glimpses. Monument Valley’s mysterious, beautiful world is aided by a stunning soundtrack composed by Stafford Bawler, OBFUSC & Grigori. It captures the epic nature of a powerful princess’ journey to aid her land and the personal engagement with a small puzzle before you.

I wish the puzzles and levels were harder, but the sheer brilliance in their design is itself a wonder to behold. The intelligence it must take to create these kinds of levels deserves respect. However, this pure intellectual achievement is ameloriated somewhat by the pure aesthetic beauty of the landscapes themselves, each of which could be their own gorgeous paintings.

Monument Valley is one of the most universal games I’ve played: I can easily recommend this to anyone, including those not at all experienced in gaming. It is simple but smart, beautiful and lonely and doesn’t let its simplicity detract from its depth and emotional core. A game that makes me cry about blocks is a game that’s doing something right.