Ancient mythology doesn’t tell us about whether the gods exist but about the people who believed in them. We tolerate histories that go so far back into the haze of history we shrug our shoulders that kings of old rubbed shoulders with deities. The lines blur between myth and fact: We can point to statues and monuments of famous names, like Pericles and Plato, and but there are just as many statues to Zeus and Artemis. This blurred line between history and fantasy has been the golden thread of the entire Assassin’s Creed franchise, so setting it in Ancient Greek times only makes sense.

In Assassin’s Creed: Odyssey, players begin the great adventure during the Battle of Thermopylae of 480 BCE – an event primarily documented by Herodotus. Famously, this was the last gasp attempt by Spartans to prevent Xerxes’ invading Persian army from taking over Greece. The Spartans and a few allies were severely outnumbered: 7,000 or so Greeks to 100,000 or 150,000 Persians. After calling for the other Greek armies to retreat, King Leonidas remained to block the only pass Xerxes could use.

They fell in battle.

The main character in Odyssey, Kassandra, is a descendant of Leonidas. But, as the game goes on, she discovers much more about her history – marking her out as special and “destined” and so on. Thankfully, this destiny dynamic isn’t an excuse to opt out of character development: Kassandra is highly regarded as a warrior and mercenary, sharp enough to debate Socrates, kind enough to befriend and inspire children, and brave enough to help a rebellion against evil forces. 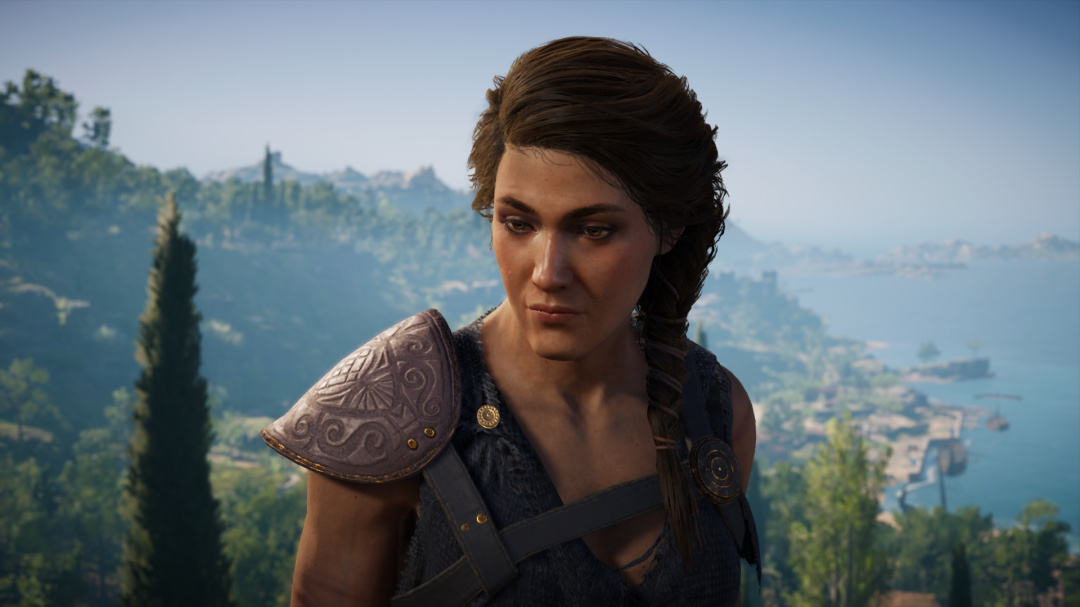 The fact that Kassandra is a woman only crops up in terms of pronouns and once when a captain said all his men had failed, she sneered “sometimes, you need a woman to do the job.” Even romance options are not gated by gender, since game companies increasingly accept that heterosexuality isn’t the only, best or default sexual orientation for its characters. Kassandra has little time for bullshit, but has an incredible sense of humour. She’s also deeply empathetic and is unafraid to show her emotions to those she loves.

Odyssey fully embraces the fact that the franchise is now an RPG: You roleplay Kassandra how you like and I made her into a “mercenary with a heart of gold”. She stands up for what she believes is right, shows compassion for those who have little but require much and is unafraid of those in power who let evil happen or do it themselves. But what makes Odyssey interesting as an RPG is your actions have repercussions that negate ideas of good or bad: Thus, even if you were kind to one family, the outcome might be devastating to all. Socrates even references this in one of many philosophical excursions with you: Can a bad action toward one be rendered right if it’s done for the benefit of many? The whole franchise has been about this: After all, you’re always playing as murderers, who’ve justified their title by virtue of a grand goal.

Odyssey also seems to have learned a lot from The Witcher 3: Side-quests are not only fetch quests or assassination missions (though those are the only two categories), but opportunities to tell little stories with interesting characters. A memorable quest saw Kassandra helping a little girl collect stones from scary caves and from the bottom of shark-infested waters, only for the story to have a twist ending when its revealed the girl takes “making friends” very literally. Aside from the twist which I won’t spoil, the girl tells Kassandra she’s never learned how to make friends with real people, due to living on her own after her mother abandoned her. Here, you have the option to chastise the girl for being weird or, wonderfully, tell her not to feel judged. “One of my best friends is an eagle,” Kassandra says, indicating the adorable Ikaros. “Friends come in all shapes and sizes.” It’s a small quest that lasts 15 minutes and I was genuinely moved by Kassandra’s warmth toward a little girl she’d never met before. Moments like this are frequent. This Spartan warrior, who barks orders to huge muscle men on a giant ship, single-handedly wipes out barracks of soldiers, and who dominates battlefields will kneel before little girls and tell them: “You’re OK.”

At a time when so much of the world seems set against kindness, finding these tiny pockets of joy folded beneath the skin of a game with “Assassin” in the title, is something to relish.

The stealth is so far the only problem I have, since something seems… off. I have yet to put my finger on it. There’s also a lack of tools in the game that lets you play with your opponents: I think here of Origins wonderful poison mechanic, where one dart would infect one enemy who would then infect others, either through his puke or his corpse. There were multiple ways to draw guards away from a Mcguffin you needed; here I struggle to really manipulate the guards. (But perhaps I have not looked hard enough – I’ve only recently acquired the Summon Lieutenant ability, which reminds me of Assassin’s Creed: Brotherhood mechanic which lets you summon other assassins to target a single enemy – for a while before vanishing.)

The game also recently took a very weird and wonderful turn that I didn’t realise I was hoping for. I’m in the middle of exam prep for law at the moment, so I’m not sure when I’ll get around to progressing further in this giant of a game.

But next time I want to talk more about the game’s story and how the design worked.

(Oh: I forgot to mention, you can also choose to play as a man in this game… but… yeah.)

One thought on “Thoughts So Far – Assassin’s Creed: Odyssey”