We’re going to show off Masquerada, a game we saw at PAX West by Witching Hour games at 3pm CST

A dark Venetian tale for the ages, featuring pause-for-tactics combat in an isometric RPG. Developed by Witching Hour Studios. Published by Ysbryd Games

Unravel the facades enshrouding the city of Ombre in Masquerada, a 2.5D isometric action RPG set in a dark Venetian fantasy world where people with masks are the only ones who can cast magic. This empowers the masked aristocrats, the Masquerada, to lord it over the impoverished Contadani. 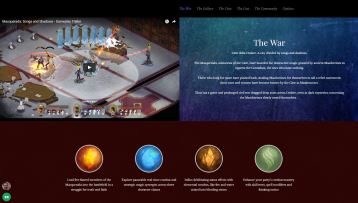 Against this narrative backdrop of class warfare and conspiracies of fey creature manifestations, players experience the journey of five flawed members of the Masquerada who struggle to rediscover faith in their diverse pasts and backgrounds.

View all posts by cherith