Failsafe is a parkour game about exploration, forgotten worlds, and secrets.

Failsafe is a parkour adventure game inspired by Hayao Miyazaki’s storytelling, reminiscent of the fluidity of Journey and the monolithic scale of Shadow of the Colossus.

This game has transformed considerably since its initial conception in December 2014, with its parkour mechanics taking center stage in terms of gameplay. Our goal is to provide huge, sprawling environments for the player to explore using dynamic parkour to navigate the remains of a mysterious civilization. The game plays like the better parts of Mirror’s Edge, with some pivotal refinements on the movement systems. Narratively, the player will be immersed in a world built by the relationship between Isra (Ashly Burch) and the Robot (Dante Basco).

Intuitive Parkour System – All you need to remember is one button to perform a complex sequence of parkour moves such as wall-running, wall-jumping, sliding, and vaulting.

Grappling Hook – Swing and sling yourself to incredible heights and distances by mastering the versatile, physics based grappling hook system.

Multiple Perspectives: The game can be played in either a 1st-person or 3rd person view

Expansive  Levels – Find unique, creative ways to reach your goals by taking advantage of the intricate architecture in the world.

Robot Companion – The Robot will follow you through your journey, granting you access to the ancient technology that permeates this forgotten world… if you ask nicely.

Secrets – Explore all the nooks and crannies to discover the hidden areas that are only accessible by performing challenging maneuvers.

In a small, remote village, on a wasteland of a planet, lives a young girl named Isra. Raised to one day lead her people, she longs instead to follow her uncle’s path and explore the world beyond the safety of their village. As another cycle ends, she convinces him to bring her along on his journey. He has agreed to take Isra to the place where he must travel every cycle in order for their people to survive: The Forgotten.

The game is in an alpha state, and we’ve been publicly showcasing builds of the project at conferences and festivals. We intend for the game to be released first on PC, Mac, and Linux with intentions to release on PS4 + Xbox One pending console arrangements.

Our entire creative and production team is accounted for and working around the clock to make Failsafe the game it’s meant to be.

We’re projecting that the project will reach its completion stage summer of 2016.

A bulk of our development time has gone toward creating the complex first person parkour mechanics of the game, and creating animations via inverse kinematics to make the visual cues of each movement as articulate as possible to emphasize the player’s movements and mitigate disorientation through fast paced, first person movements.

The big task ahead is finishing the levels that will comprise of Failsafe’s main campaign. The $80,000 goal will provide the team with the final resources it needs to complete the game on our schedule.

We here at Game Over want to remain an independent studio so that we can create new and challenging games that do not adhere to mechanical norms and what publishers consider “safe” projects. We want to create games that we as gamers love, and think you will too. 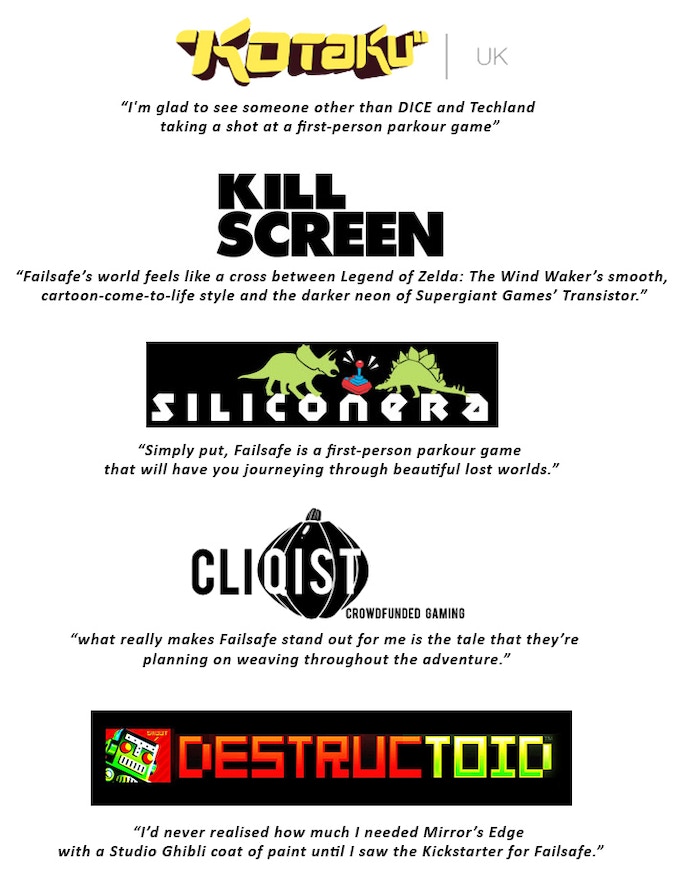 My Tweets
Join 28,989 other followers